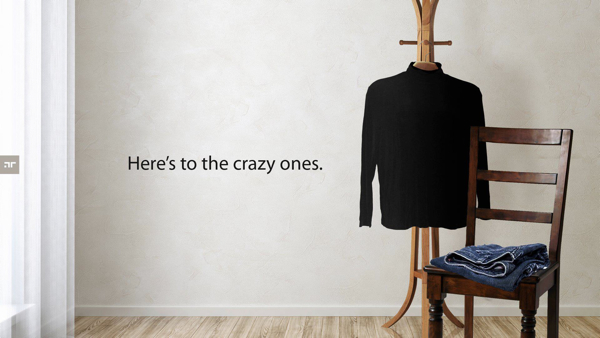 “Here’s to the crazy ones. The misfits. The rebels. The troublemakers. The round pegs in the square holes. The ones who see things differently. They’re not fond of rules. And they have no respect for the status quo. You can quote them, disagree with them, glorify or vilify them. About the only thing you can’t do is ignore them. Because they change things. They push the human race forward. And while some may see them as the crazy ones, we see genius. Because the people who are crazy enough to think they can change the world, are the ones who do."

It’s easy to have opinions about how something “should" be. To whine, complain, or grumble that the world isn’t living up to your expectations. To have certain tastes, and be disappointed that others aren’t delivering them.

Steve Jobs had very strong opinions about how the world should work. Instead of complaining or waiting for someone else to act, he focused on creating beautiful objects that brought the world closer to what he imagined.

Steve was a true craftsman: an artist that shipped. Over and over again.

Steve Jobs, Steve Wozniak, and Ronald Wayne founded Apple 35 years ago. In three and a half decades, Steve built himself a legacy many times over.

Life is short. What are you creating today?