I have to admit I’m a bit distracted.

When Kelsey and I moved to Colorado two and a half years ago, we decided to live in the mountains. We found a little apartment next to the Cache la Poudre River, surrounded by Roosevelt National Forest.

It was the perfect place to put our heads down, focus, and get things done. The Personal MBA book was largely drafted and finished there. Kelsey built much of her online yoga anatomy course there. I wrote about our experience securing the apartment sight-unseen from New York City via an Option in the book.

When my daughter was born, we moved to downtown Fort Collins - the mountains aren’t a great place for an infant, and it was easier to be closer to stores and grandparents.

I still needed a place to write and take consulting calls, though, so I kept the place in the mountains. Every day, I’d drive twenty miles up the canyon to spend the day reading, writing, and researching. It was the best of working from “home," but in a dedicated, distraction-free space.

My “office" may no longer exist as I’m writing this.

Fifteen miles west of Fort Collins, over 43,000 acres of trees and brush are burning. Hundreds of homes have been lost in the High Park Fire, and one person is confirmed dead. The smoke plume drifts east, dropping ash on Fort Collins and extending more than 100 miles into Wyoming and Nebraska.

The fire was caused by a lightning strike. Very low humidity, no rain, and bone-dry beetle-killed pine trees combined to produce the worst possible conditions for containment. It’s the most destructive fire in this area in history, and approximately 1/3 of national firefighting resources are being diverted to contain it.

The fire started on Saturday morning, and within hours, major roads were closed and homes were evacuated. No time to get anything out when the fire’s spreading at a rate of over one-foot-per-minute in all directions.

At present, my little place in the canyon is surrounded by fire on three sides. Inside is 99% of my private library, recording equipment, and furniture. If the structure survives, it’ll be a miracle. Smoke damage is a near certainty.

Every thirty minutes or so, I check the incident website to see if the map has been updated, hoping the area isn’t shaded in red. Not that there’s anything I can do to affect the outcome in one way or another… 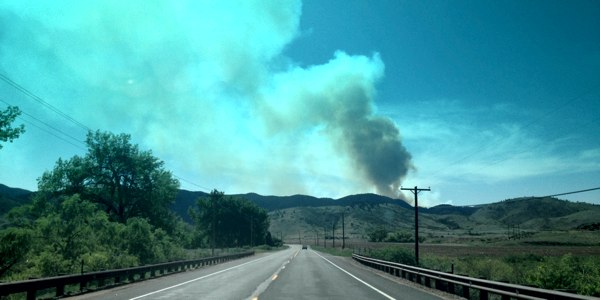 Here’s the kicker: this isn’t the first time we’ve worried about a fire destroying my refuge. We dealt with the exact same possibility less than three weeks ago.

As I hosted a sold-out Personal MBA Masterclass, a fire was sweeping toward the structure from the west, started by a careless camper with a cooking stove. During the three days participants were in Fort Collins, I didn’t know if my office would exist when I returned. It made for some lively discussions.

I was thankful for the company that week: it gave me something else to think about.

We had some warning for the Hewlett Gulch fire: my landlord called a few hours after it started, and I had enough time to drive up and bring down a carload of belongings. As I drove toward the canyon, a thick plume of smoke was rising over the mountains. I stayed for an hour, loading the most important and expensive items along with everything sentimental, and left the rest to chance.

As I left, I thought to myself, “I may never see any of this stuff again." It felt odd to think, and even odder to know it was a very real probability.

As it turned out, firefighters were able to save the structures: a controlled burn on the mountain behind the houses removed much of the fire risk, saving the homes in the area. A close call… crisis averted. No homes were destroyed, and there was no smoke damage. We were all very, very, very lucky.

None of us expected to deal with the same situation in a matter of weeks.

I’m writing this post under conditions of extreme uncertainty. I don’t know what’s going to happen, but I thought it would be useful to write down what’s going on inside my head when the resolution is not yet known.

Here’s why I’m writing this now instead of later: I designed The Personal MBA book to be useful in life outside of business.

Life is an uncertain, ambiguous venture, and unexpected events happen constantly. Some of those events are bad, threatening, or dangerous. There’s a reason why many of the lessons are implicitly Stoic.

Throughout these two ordeals, I’ve found many of the ideas I teach every day useful in handling the uncertainty and emotional aspects of this situation. I want to show you how I’m using many of the psychology and systems concepts in the book to deal with the situation. Consider it a first-person case study in crisis management.

The High Park Fire and the Hewlett Fire started unexpectedly, but they weren’t unanticipated. Fire officials have been worried about these fires for close to twenty years now.

The local Mountain Pine Beetle infestation has been a problem for decades. Pine Beetles feast on evergreen trees until they die. When the trees die, they dry out, becoming major fire risks.

The timing of the events wasn’t foreseeable, but the risk was, and emergency management organizations were able to respond immediately.

Large quantities of beetle-killed trees increase fire risk; the more dead trees there are, the higher the risk. Combine dead trees with low humidity and no rain, and any stray spark can start a cascade of fires. If one tree goes, it’s likely they all go.

It used to be common practice to remove beetle-kill via logging, but that was curtailed by law years ago, increasing the coupling of the system over time.

When a wildfire happens, there’s only so much you can do. Firefighters have the equipment and ability to build fire lines, but only if they can work faster than the fire can spread.

As an individual, I have the potential ability to evacuate if a route is present, save property if there’s time to do so, etc. I can donate to organizations that have more options than I do. I also have the ability to ignore warnings and enter evacuation zones, but that would be stupid and life-threatening. The risk isn’t worth it.

Aside from those actions, I can do nothing. My Locus of Control at this point in time is zero.

My brain doesn’t like that truth one bit, but it’s still true. There’s nothing I can directly do in this situation other than wait.

My library is on my mind a lot. I’m pretty sure my personal business library is larger than the business sections of all three branches of the Fort Collins library district combined.

I’d hate to lose it, but it’s a high probability that I will. That potential loss, and the Loss Aversion it’s triggering, is currently a massive drag on my attention, making it difficult to focus on anything else.

Left to my own devices, I refresh the official incident webpage every few minutes, even though that won’t do anything to protect against a loss. The last two days have been largely shot from a productivity perspective.

I can see what’s happening, and I know it’s only Threat Lockdown, so I’m compensating as best I can. Knowing what it is, and what to call it, makes it easier to handle emotionally. It’s still hard, but it’s easier than it otherwise would be.

After I took a car-load of possessions down from the mountain after the first fire, it took three days for the fire to reach the structures.

I wanted to kick myself: we had time to move everything out. But, looking back, we didn’t know how fast the fire would spread, and we didn’t want to take the risk of going up the canyon, only to be caught by the blaze and unable to get out.

With this fire, Hindsight Bias looks like this: I feel so stupid for taking things back to the canyon I took out the first time. Of course, I didn’t know the second fire was coming, so that feeling is misguided, and I’m doing better at avoiding unproductive angst over those losses.

I’m very glad we have renter’s insurance: any losses we incur will be temporary. It’s a good thing we have a policy in place: there’s no chance any insurer is writing policies for this area until the fire is out. Things can be replaced.

Fail-safes have to be in place before adverse events happen.

I’m currently in progress of recording the Personal MBA audiobook, which I’m planning to release in September along with the second edition. I’ve been working on it since February, and I was planning to record all week this week.

The project could be a textbook case of the Planning Fallacy. I expected recording to take weeks, and it’s taken months. Delays included:

I didn’t anticipate those things when planning the project, but they happened all the same, impacting the project. We’re still trying to get it done on time, but it’ll be close.

I’d like to wrap up this post by publicly thanking the Larimer County Fire Division, Sheriff’s office, Red Cross, and other public and volunteer organizations who are doing their best to fight the fire and mitigate the impacts to people, animals, and property. Shared Resources like these are a major function of a strong society, but Absence Blindness makes it very easy to overlook their contributions until you see their work first-hand.

If you’d like to help, the best thing you can do is make an automatic monthly donation to organizations like your national and local chapters of the Red Cross, even when there’s not an active emergency. The more resources these organizations have, the more quickly they can respond when they’re needed.

Make it automatic, and you can rest assured you’ve already done your part to contribute to making things better when unexpected disasters occur. All it takes is a single decision and five minutes.

Update: is well. The High Park Fire is now 100% contained after growing to 87,284 acres and consuming 259 homes, making it the most destructive fire in Colorado history. My office, as well as the other houses on my street, escaped with no fire damage or significant smoke damage. Other homes less than half a mile away weren’t so lucky, and we have friends that lost everything. I’m now working from a new office in downtown Fort Collins, and I’m happy to be returning to my normal research and publishing schedule. Thanks for your support during this trying time.